The eyes are the window of the soul… 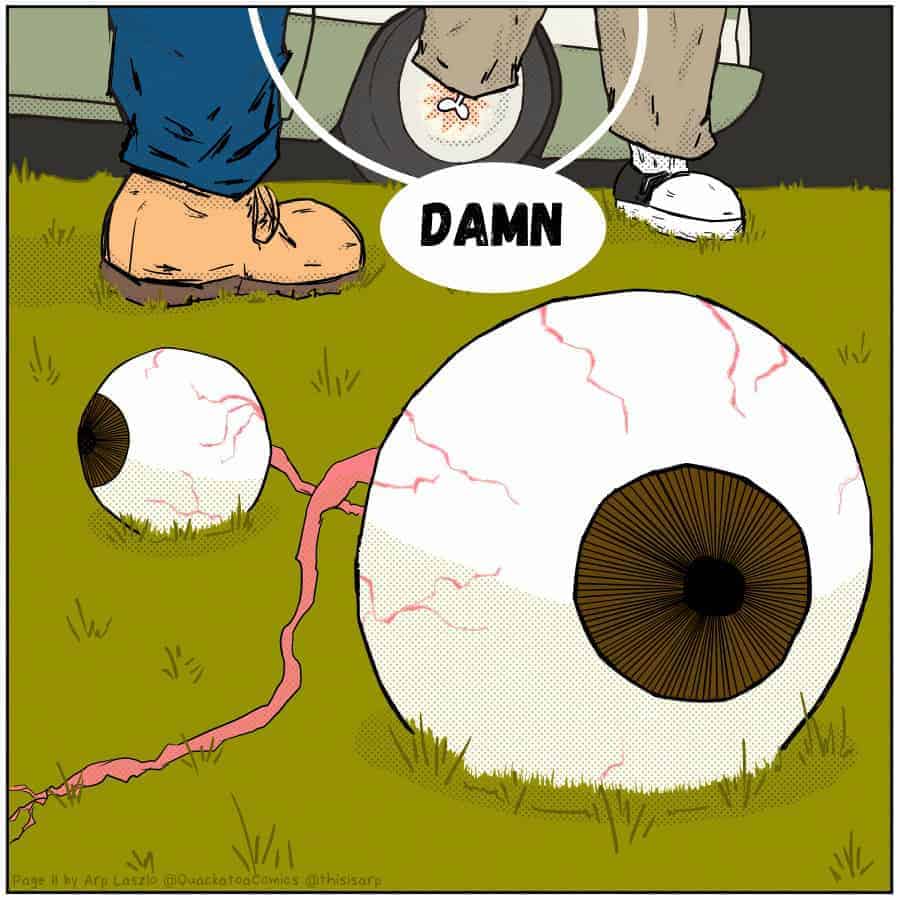 This page was not in the original draft and came as an idea at some point. I wanted to experiment a bit with halftones, which I like a lot better than more analog style brushes for shading. Then I saw Into the Spiderverse last week and I MUST MASTER THE HALFTONE.

Also, if you haven’t seen Into the Spiderverse yet you need to rectify that ASAP.

And watch it one the biggest screen you can find/tolerate. It is simply AMAZING, like a comic book come to life (in the best way possible). This movie is a game-changer, animation won’t ever be the same again. Or at least it shouldn’t, because the now ubiquitous Pixar-style just lacks style & panache.

Genndy Tartakovsky pushed 3d animation to have a touch more 2d styling in the motion with the Hotel Transylvania films but Into the Spiderverse takes what’s possible, combines 2d and 3d, and runs with it. It’s an absolute feast for the eyes that I must see again on Imax. Or perhaps 3d. Or both.

Oh yeah – the story’s good too.

Miles & Gwen are my favorite superhero characters at the moment. And I dug Kingpin’s motivation (not to mention how he was drawn).

The movie it makes me think of most in terms of impact is Jurassic Park. Seeing realistic dinosaurs on screen for the first time was mind-blowing and it changed film-making forever. Into the Spiderverse is like that – it should change animation forever. What a tour de force.

If you somehow haven’t heard about Into the Spiderverse, here’s a trailer:

PS The new Hellboy trailer came out today and it sucks

Sooooo disappointed. They’re trying to go all Ant-Man/Deadpool-y with it and it does. not. work. The mood from Mignola’s art is nowhere to be seen. At this point, the movie just looks bad. Sigh…

Oooh this is sticky

Join my email list to receive my newest comics and get advice on how to be a creative entrepreneur without selling your soul.

My posts, reviews & recommendations may contain referral links! If you buy something through such a link you won’t pay a penny more but I will get a small commission, which helps keeps the lights on. Thanks!

I write about life as a creative, how to make money without being a skeevy marketing bro, good reads, and more. Free exclusive comics may or may not be involved.

Each issue is written straight from the heart. I write about life as a creative, how to make money without being a skeevy marketing bro, good reads, and bad jokes. Free exclusive comics may or may not be involved.