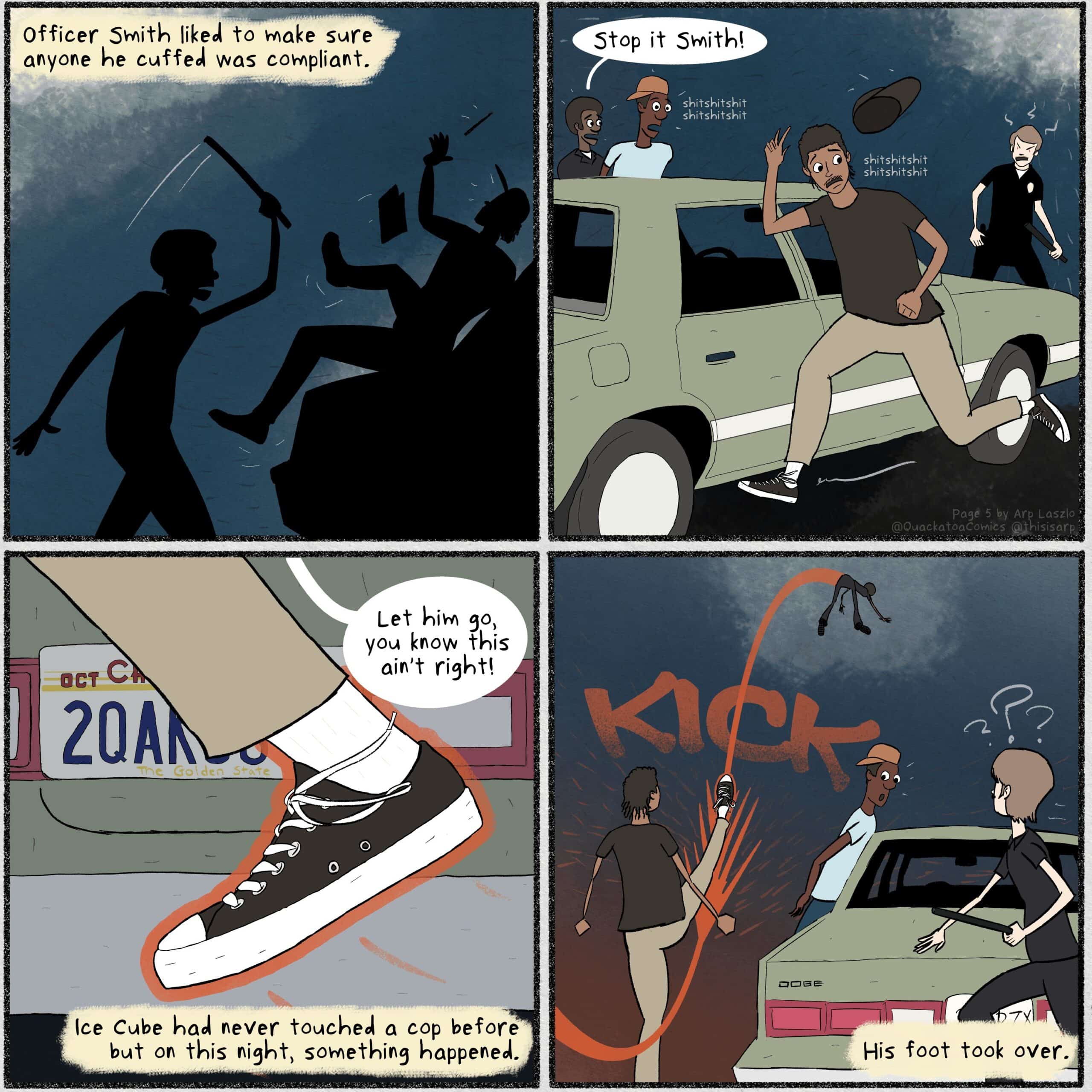 We finally get some action! This page took awhile because work has kept me busy. On most nights I’ve been only able to dedicate 30-45 minutes to comicking. And I’ve barely done any sketching/drawing for practice & improvement. Ah well – shit happens. Progress may be slow but it’s steady.

This was a challenging page because of the action.

This was the first page of specific, defined action that I’d drawn in years. I needed to condense the action so it made sense. He starts off on the hood, dodges the strike, lands on the other side and runs around the car. I considered 6 panels but they were too narrow to be effective. I also considered a multi-action panel, inspired by this sequence by Andrew Maclean:

Coming up with the idea to have the foot in front of the license plate completed the page. It was clear where Cube was in each panel – hood, side of the car, rear, other side. It’s amazing how one idea can make everything else fall into place, like the last piece of a puzzle.

The angles were a challenge too because I had to draw poses that I’d never drawn before.

While I was scrutinizing Maclean’s art in Head Lopper I noticed that he uses head-on, direct views infrequently and that a (simple?) majority of his panels with characters are in 3/4 view. So that made me rethink my panels.

What really saved my butt was Clip Studio Paint’s posable 3D models. They’re crazy customizable so it takes a little getting used to but it is incredible to have 3d models that will literally move however you want them to move – and they stay in positions, unlike the classic wood mannequins. This is one of CSP’s killer features.

This page is also a paeon to laziness.

Because each page takes me so long (guesstimating 12-15h for just the art) I just don’t want to do backgrounds right now. I will draw backgrounds as I get faster but for now it’s taking baby steps, starting with the texture and painted backgrounds that started with the previous page.

And you know who else makes me feel better about not agonizing over background art? Andrew Maclean. Many of his panels have no background art and are different, vibrant colors (and that influence started on page 3).

I discovered Head Lopper a couple of months back. It’s a quarterly swords & sorcery comic published by Image Comics that is a brilliant combo of art & storytelling. As a quarterly it’s 3-4x the size of a regular comic and each issue is an incredibly satisfying read. As someone who prefers reading TPBs to monthly comics, I’d like to see more creators take this route.

As a long-time fan of fantasy, it’s a perfect blend of action & magic. As much as I like the writing, I like the art even more. He’s not super detailed/realistic, but there are plenty of details. I dig all the inked textures (which is something new in my art above).

And I especially dig how he draws action. I grew up reading superhero comics and I much prefer Maclean’s action sequences. They’re kinetic. They’re alive. And I love the defined paths of things in motion (which directly influenced how I drew the kick in the last panel).

And he’s influenced by Mike Mignola too, with black shadows and negative space. I love how the influence is obvious yet the style is completely his own. That’s what I’m striving for.

Thanks to Maclean and Bryan Lee O’Malley, the next page is going to look different.

In the past month I read Scott Pilgrim by Bryan Lee O’Malley for the first time in 8 years. And I recalled how it was the comic that ignited the desire to make comics again. A great, well-written, relatable story that’s one of a kind.

And the art also kicks ass. Both O’Malley & Maclean have these styles that lend themselves so well to action. I scrutinized the sketches at the end of the TPBs.

My preference for Maclean & O’Malley’s art made me want to draw my comics differently. So expect a stylistic change moving forward. It might take a while before every page looks slightly different 😂