The intro quote takes me on an unexpected, and slightly unwelcome trip down memory lane. Plus Hellboy! /// “You will never be good enough and that’s ok. Trying to get better is what really matters. The joy of what we do is in the making.” This was said to me by a visiting artist in school when I was 11 and it stayed with me. Jorge Gutierrez I’m not sure I got any good artistic advice when I was a kid – at least nothing that stuck with me. I drew a lot and enjoyed it. There was an art … Continue reading 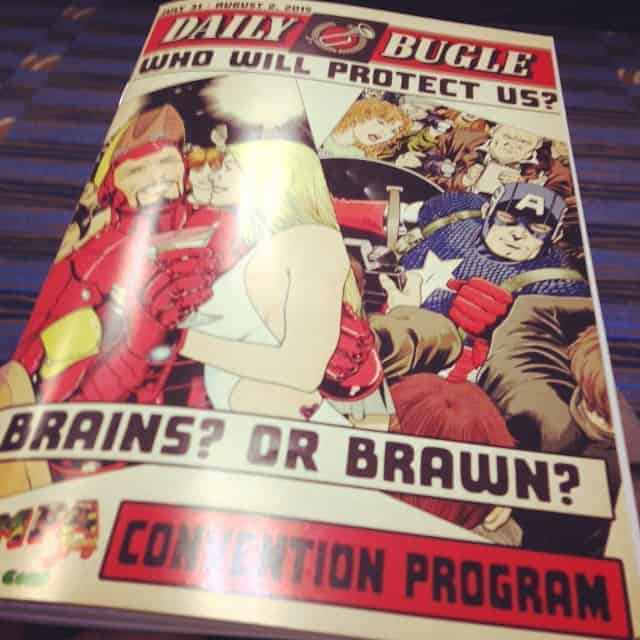 Yes, this is indeed late as the con finished 2 weeks ago. It was 3 exhausting days of absolute bliss, followed by a week of I hate working I just want to write and draw comics all day. (I’m sure I’m not the only artist who has those weeks, there must be a support group online for it…)

This was my first con since Austin Wizard World in 2011 and man was it worth the wait. Supposedly some 50,000 people went, which is way higher than it seemed (the 30 minutes lines for food might attest to the figure).

It was also a great weekend for my two eldest, who went all 3 days – especially my near 13yo who was really into a lot of the panels. It’s nice to share this with them & hopefully stoke a lifelong love for comics, movies and other fun stuff.

The biggest thing for me was discovering improv thanks to Penguin Knife Fight and their 3 awesome improv classes. I’d never done any improv before but I’ve more into comedy lately. It freaked me out, so I had to give it a shot – and I LOVED it. I may have a new hobby now, thanks to PKF.
https://instagram.com/p/52COSSSxdB

By the way, if anyone knows the two people on the right please let me know. They were another family who were at all 3 improv classes who seemed pretty cool. I was all set to talk to them some more and figured I’d see them later on the last day and did not :/

All in all, #TBCC2015 was 3 days of fun, inspiration, learning & making connections that I will not miss again (fie on me for not going the previous 2 years). Here are the major highlights of the con for me:

My one fanboy moment

I met Neal Adams, who drew so many of the Batman comics that I read in the 70s 🙂

My daughters and their friends were gaga for Cogs & Creatures‘ kawaii creations. I chatted with Consuelo and was happy to find out that that’s what she does for a living. How cool is that? Coming up with cool things and making a living with them while putting smiles on people’s faces? That’s the life.

I bought this gorgeous comic as a gift for my wife, thanks to the art by Emily Cheeseman. Had a nice chat with her and she’s a fellow Manga Studio user. Her style is one I’m exploring these days.

I met an Indian American artist

Yes – I met a brother working in the field (though being Indian he started off as an electrical engineer). Sajad Shah is a really kickass artist and a nice guy with whom I had a nice chat. It was very cool to see a fellow Indian in the field (and I was too engaged in the conversation to take a pic).

My favorite panel: So you wanna be a writer

https://instagram.com/p/52Z_TQSxTk
I kinda went on a lark but left feeling totally inspired by Scott Eder, Tracy Akers, Dora Machado & Maria DeVivo – not to mention the energy in the room. Although I have no desire to write a novel I do have stories that need to be told. This was the one panel where I took a LOT of notes. I also visited them at their table and not only got some wonderful support and advice but some great recommendations on books to read (thanks to Scott I started the Mistborn series, which I’m enjoying quite a bit).

I saw the best cosplay ever

Here’s my daughter with the Tooth Fairy from Rise of the Guardians. What an incredible costume – especially those picture perfect wings. Clearly she put a lot of effort into her cosplay and it was well worth it. She won the ‘best craftmanship’ award in the cosplay contest but she should’ve won the whole damn thing (despite the winning Iron Man/Spawn mashup being original & well done).

One panel got me hooked on Face Off

I went to a panel on silicone prosthetics and learned a lot – the biggest thing being that the sponsor (Reynolds Advanced Materials) is based in Orlando and give seminars on making molds and casting faces. As a kid, I LOVED the 80s classic FX (and wish someone had told me I could have gone to special fx makeup artist school for less than $3k – that beats the crap out of overpaying for a useless Economics degree). I forgot who was the makeup artist but he’s apparently been on Face Off, which I had never heard of but am now addicted to.

I met a cool animation company out of Orlando

I had a couple of great chats with David Andrade of and about Theory Animation. It’s freakin’ cool that a cool animation company isn’t that far away. I met David on the first day of the con and that;s when I realized that I needed business cards because I’m not just a fan. As fun as it is, the con is also a chance to make new friends and network.

The most original cosplay award goes too…

Maybe it’ll make sense to get a table next year, or share it with someone – that’s what I can work towards. Until next August, I can try hitting other cons in Florida like the now 4-day-long Megacon in Orlando next May.

That’s my wrap-up of #TBCC2015. I leave you with one the most amusing sights from the con – Deadpools dancing to the Village People…