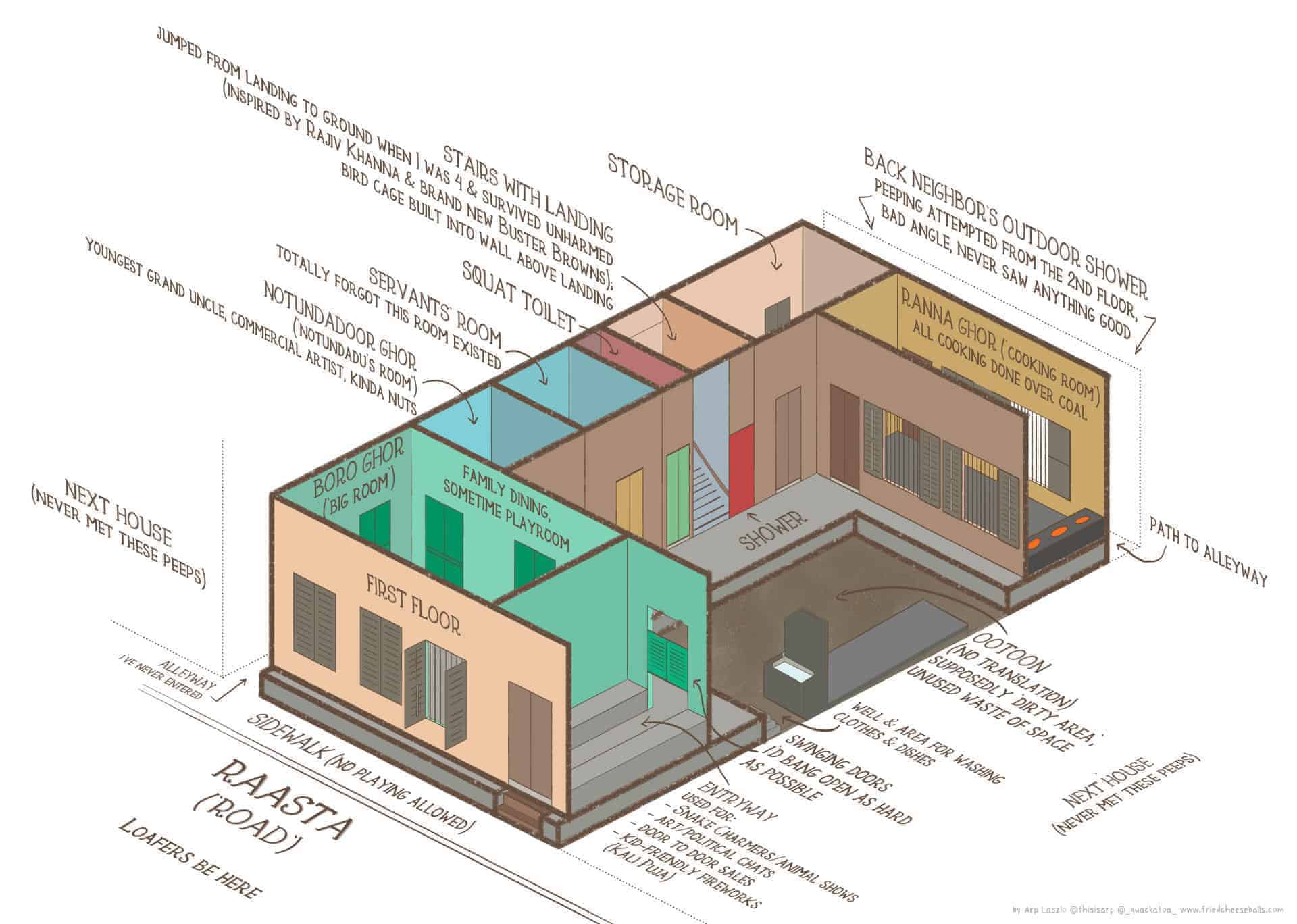 Another 3 weeks later, another page. Can’t complain though – at least there’s some consistency! And instead of making the whole house one comic, I decided to break it into individual floors. That leaves the option of potentially putting them altogether into a poster (which sounds cool but I dunno who would want one).

I’m still chugging along with the 100 Days of Making Comics challenge – today is day 29 (iirc). If you’d like to keep up on it, please subscribe to my Youtube channel or this playlist.

I will note a few things about this floor, and the house in general:

The house is basically a three story brownstone. I’ll guess it’s at least 100 years old, with some colonial influence.

There be loafers in the road. In my grandma’s eyes (and she ran the house, make no doubt about that), Good People did not hang out in the street. And by ‘good’ I mean rich & polite. The streets were the domain of the Loafer. Technically someone who loafs around, ‘loafer’ was a common pejorative thrown at me & my cousins, that we might grow up to become Loafers (the horror). The problem was that during festivals & parades, the so-called loafers were the ones dancing in the street – and that was really, really cool to my young, shy self.

The only family member living on this floor was Notundadu (‘new grandfather’), plus at least one servant. We weren’t/aren’t rich (anymore) but just about everyone has a servant, except the servants themselves. We also had part-time help. My grandmother made it a point to pay for servants’ kids to go to school & such, in addition to wages.

I’ve never used the toilet or shower on this floor – they freaked me out (especially the toilet, which was dark and thus likely home to many giant cockroaches).

That landing I jumped from when I was 4 was about six feet off the ground. I missed hitting my head on the ceiling by an inch and on the way down I noticed that the floor I was jumping onto had just been washed (leading me to think whatever my 4yo equivalent of ‘oh shit’ was). I landed flat on my feet, no slipping, nothing. It’s a miracle because if I’d hit my head on the ceiling, I probably would’ve landed on my neck.

You’ll also notice that I have no idea who the neighbors are or what is in the alley next to/behind the house. I was, shall we say, way overprotected. I wouldn’t be surprised if I went now and they’d try to keep me from walking around freely.

I’m very curious to see how this is received – and to finish up the next two floors and move on to the next ‘real’ comic page. In the meantime, I’ve also started on a secret short comic project that will be posted on my Insta & my other site.

Lastly, I need to share some compliments I recently received from Brad Guigar.

When I started FCB 2y ago, I joined Webcomics.com for a one-month membership to see what it was all about. At the time, it was a fairly quiet site but had a lot of good information. Brad keeps the site updated with a lot of content, including much from his own experience as a successful comicker.

Members are allowed to submit a comic for critique, and what Brad mainly noted was that the format was wrong. At the time, I was hellbent on making it in the newspaper strip format like some of my idols. Plus making pages seemed onerous – at the time. But he was right.

A few days ago that came to mind again as I came across him in the Twitterverse. I figured it would be nice to let him know that he was right – and he was quite complimentary in return:

Oh my gosh! Those pages are INCREDIBLE! The storytelling is so much more smooth! You should be proud of that comic. It’s tremendous!